Angular Modules are DIFFERENT from ES6 Modules, here's why

I often see people being confused when it comes to understanding Angular Modules vs. ES6 Modules. This happens especially for newcomers which enter the JavaScript and front-end development ecosystem and immediately get confronted with both of them. Here’s a short article that hopefully sheds some light on the matter.
Contents are based on Angular version >=2

To start straight away: Angular Modules are different from ES6 Modules!

I don’t like to repeat the same content, so if you want to get a exhaustive introduction of what JavaScript modules are about, I highly recommend reading the article on “A 10 minute primer to JavaScript modules, module formats, module loaders and module bundlers” by my friend Jurgen Van de Moere.

In short we need JavaScript modules…

Prior to ES2015 (ES6) there was no module system in the standard of the ECMAScript language. What we had (and still have) instead, are different implementation patterns for “simulating” a module system: there are the simple IIFEs (Immediately Invoked Function Expression), UMD (Universal Module Definition), AMD (Asynchronous Module Definition) and CommonJS. ES6 finally introduced a standard way of defining modules. This example illustrates a simple ES6 module, importing a dependency math-utils , specifically the sqrt function of that math-utils library. It then defines a couple of math operations and exports the addition and multiplication :

In short, an ES6 module is represented by a single file, having different imports and exports.

What are Angular Modules?

An Angular Module groups together a set of Angular artifacts, namely components, directives, pipes and services that are part of that very same module. That said, it represents a logical grouping into what can be called a feature area of our application (i.e. contacts module, admin module,…). Moreover, an Angular Module also defines dependencies to other modules, that is, what other modules it needs to import and in turn which components, directives or pipes get exported.

In this example, we see imports such as the FormsModule whose exports can now be used within our ContactModule . Moreover, the module declares what components it uses in the declarations property and the services in the according providers property. As you can see from the exports property, we only export certain components which are then available to other consumers of our ContactModule .

Also, reusing components, services,… is done at the module level. We don’t directly import a single component from another module such as the people.component in the following example.

Using a component from another imported Angular module (i.e. the PersonComponent from our PersonModule) is as simple as using it in the template of one of the components that is part of the importing module. In our example the ContactsModule:

The following shows an example of a modular application with a “shared” and “contacts” module. Internally, the Contacts Module contains other artifacts such as person components. 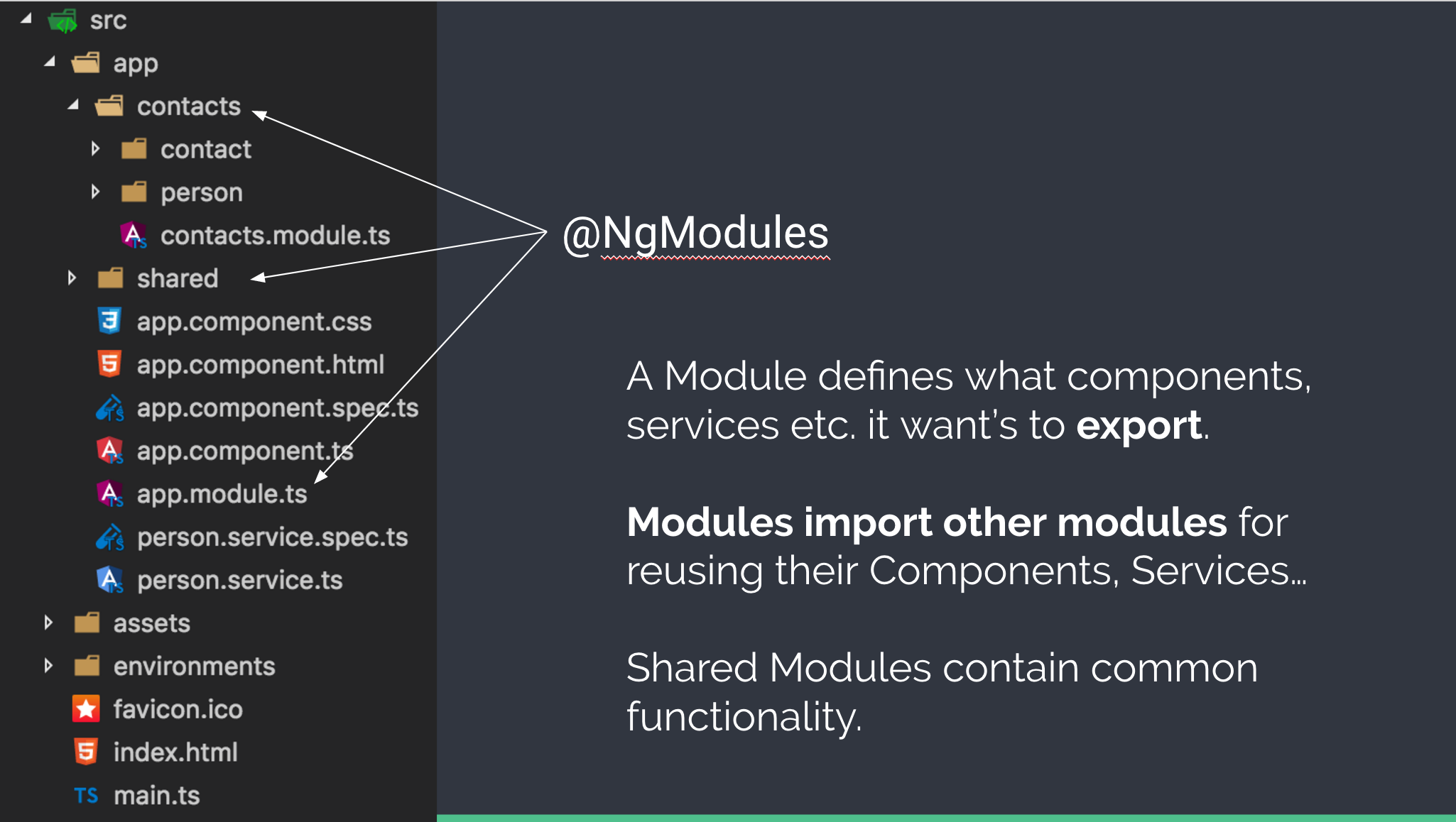 As such, Angular Modules can be seen as the “unit of reusability” within our application. As we have seen, they define their members, what gets imported and what gets exported. It is also best practice to encapsulate the module specific application routes within the module itself. Hence, ideally, when we want to get rid of a feature of our application, say the contacts feature, we could simply delete the according Angular Module, with a minimum impact on the other areas of the application.

"Angular Modules are the unit of reusability"

Could I simply have one single application module and don’t care?
Technically you can, but it’s definitely not recommended as this most probably results in a poor application structure, is bad for the modularity of your application and you also regret to some very powerful features such as lazy loading which is done at the Angular module level. All in all, don’t do it, it completely messes up your application architecture 😃.

To summarize, Angular modules are a means to logically group a set of symbols (components, services,…). An Angular module usually comprises an entire folder.

Want to learn more about NgModule? Check out the FAQ page on the official Angular documentation.

On the other side:

Thanks a lot to Wassim Chegham (@manekinekko) for reviewing this article!