In Visual Studio 2012 the team invested a lot in order to improve the testing experience. Sooner or later also the MS guys found the extreme value into having an automated test suite. One of the additions I particularly like is the ability to automatically execute the tests after each build. Actually I even implemented a working prototype for this in VS2010, but never had the time to finilize and publish it. The problem however with the VS2012 Test Explorer is on how to instruct it to only execute the unit tests within your solution and not the coded UI or integration tests.

…given that you follow the project structure mentioned above you can simply type Project:“.UnitTests”.

… there is no such filter any more. Instead the newly created Test Explorer provides you with an “intelligent” filter textbox where you can set filters like FilePath: "", Result: "". The key there is to use the filter “FullName” and set it to “UnitTests”.

Just as a side-note: apparently the filter is not as intelligent to support regular expressions which is really bad…

… I usually opened the Test View and added a grouping for the projects which then already gave me a nice view about the Unittest and Integrationtest projects and moreover I then added a filter by the project name. 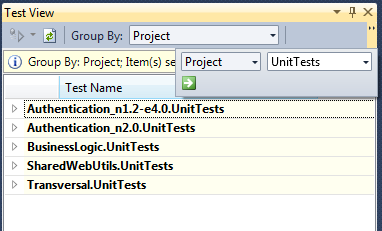 An alternative would be to use the [TestCategory] attributes and to filter against those.