UX: Why GitHub for Windows is better than VS TFS Integration

Did you already try GitHub for Windows? It's created in a modern Win8 looking style. Initially it actually feels a little bit odd, but the more I use it, the more I like it...I even start to slowly abandon the so much loved Git Shell again. Is that good? Anyway, yesterday I had just committed a piece of source in GitHub for Windows and then a couple of seconds later in VS2010 using TFS. The experience is much worse. Why?

Well, think about what interests you most when you are about to commit something to your VCS repo? The source, right? The exact changes you've made in every single source file. Do you see that in the TFS checkin dialog? Hmm...yea, you see it, but you have to make extra clicks:

That's odd. In GitHub, on the other side, you immediately see the files you've changed and directly beneath, also the exact changes within that file: 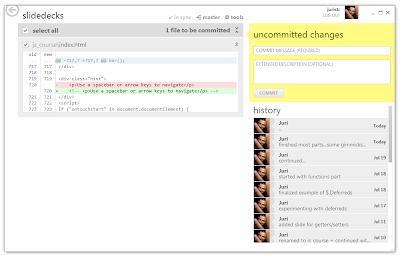