Today I tried to start the new Ubuntu 11.10 from the live CD on the old desktop computer of my girlfriend. Her computer is quite slow and the old WinXP installation broken. So why not take the occasion and try Ubuntu :). 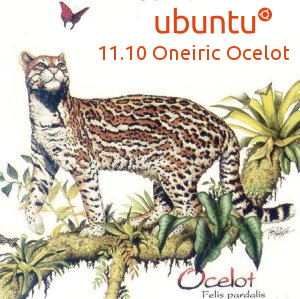 I was impressed by the new Unity interface presented in the online live Ubuntu tour. Much cleaner, more modern UI, actually there are many similarities to OSX. Anyway, I created an install CD and booted the computer from that. On the boot option I chose to first just run Ubuntu from the live CD. Everything seemed fine, but then, black screen.
As usual when you use a Linux system, ask Google. And look there, a nice forum entry with some helpful instructions (thx to the community).

Basically the problem was to change the kernel boot options from quiet splash to quiet splash nomodeset. What is this "nomodeset"?

nomodeset
The newest kernels have moved the video mode setting into the kernel. So all the programming of the hardware specific clock rates and registers on the video card happen in the kernel rather than in the X driver when the X server starts.. This makes it possible to have high resolution nice looking splash (boot) screens and flicker free transitions from boot splash to login screen. Unfortunately, on some cards this doesnt work properly and you end up with a black screen. Adding the nomodeset parameter instructs the kernel to not load video drivers and use BIOS modes instead until X is loaded.

So in order to be able to install Ubuntu I booted the system from the live CD. At startup make sure you press the down-key multiple times to enter the classic live CD menu with the options for either "just run" the system, install it or perform some memory and disk checks. At the same time, when pressing F6, there is the possibility to check the "nomodeset" boot option. Then try to run the system, it should work.

Then after having installed Ubuntu you have to do a restart. Again, press the down-key or End key to enter the startup options. Select the desired one (not recovery) and press "e" to edit the boot option as follows:
Then press F10 and the system should boot.

So once you've booted the installed version you need to permanently configure the boot mode. The best way is to open a terminal window and type
sudo gedit /etc/default/grub
and edit the GRUB_CMDLINE_LINUX_DEFAULT as follows:
Save the file and execute a sudo upgrade-grub. Then your computer should boot normally next time. Here's a link I found quite useful of some hints to perform after installing Ubuntu: http://www.techdrivein.com/2011/10/15-things-i-did-after-installing-new.html. Questions? Thoughts? Hit me up on Twitter