Should Android Worry About the iOS 5 Update? Definitely Not!

With the announcement of the new iOS 5 at the WWDC, the first articles emerge already on the web relating the new features with the existing Android OS. Take for instance the article from ibtimes, entitled "iOS 5: Top Five Features That May Worry Android". 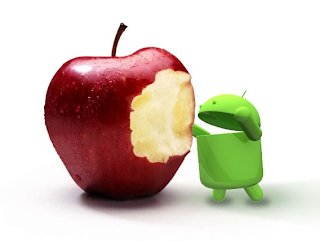 Do you think Android has to worry?? I don't really see any point:

Feature 1: Notification Center
The new iOS offers now the possibility to get notifications by swiping down from the top of any screen. Sounds familiar to you (Android user)? Well, probably yes, as this was build-in starting from the first version of Android. So I don't see a treat in this, but rather iOS now finally introduced a standardized way on how apps can communicate notifications to their users (in v5!).

Feature 2: Twitter Integration
I did not look at the details on how iOS integrates Twitter but given Android's architecture of allowing apps to seamlessly integrate with each other, this seems nothing spectacular. Android is designed such that application developers can specify points in their apps (i.e. in menus, lists,...) where other apps can contribute their content. This happens in a very dynamic, decoupled and structured way, not creating any kind of dependencies among these apps.
Let's make an example, always based on Twitter. If you have Twitter installed and you linked your contacts with your Twitter followers, then if one of your contacts appears in both, you'll have the possibility to tweet him directly from the menu of the native Android contact application. In the details you'll even see his last tweet, just to give you an idea. This not only works for Twitter, but Facebook, Google Talk and potentially any other app that wants to hook in.

Feature 3: iMessage
Sounds like a plain old IM application, natively integrated into the OS. Well, Android comes with GTalk preinstalled that allows you to communicate to everyone of your contacts, whether they're on another mobile, tablet, notebook or desktop computer. Obviously, sending photos, videos etc is not an issue. Dedicated devices can even conduct video chats over GTalk.


The feature also lets one to start a conversation on one iOS device and pick up where you left off on another.

Feature 4: Photo Sharing
Well..share it by Email, Dropbox, Picasa Web, Facebook, ... (stands for any other kind of app that allows sharing of photos) as you like.

Feature 5: PC Free
Well...come on, we're in the 21st century. WiFi activation, OTA OS updates and so on worked from the 1st Android version.

To conclude, I don't think Android has to worry about the new iOS 5 update. As can be seen, many of the new iOS features have already been there since the first version and they improved a lot in recent updates of the OS. A major advantage of Android is in my eyes it's architecture which gives an enormous flexibility in the creation of new apps and services that seamlessly integrate into the OS. But it is nice to see how the two mobile OSs' push each other forward.
Questions? Thoughts? Hit me up on Twitter

Getting Started with Android Development

Coding an Update Functionality for your Android App