Today I started writing the instrumentation tests for the Android platform side of the project. For your understanding, here's the structure of my situation:
So far everything's good. In the Android Test Project I'm writing my test cases extending from the AndroidTestCase class which gives me basic Android-platform specific objects like the Context object. The Android Test Project references the Android Project for testing it, obviously :) . Moreover since in the test cases I'm using objects from the Library Project I've referenced also this one. 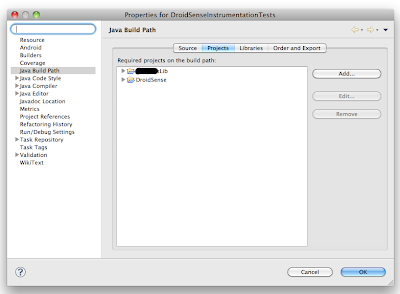 For the purpose of comfortableness you create a generic suite like the following
Then running this test using the correct menu entry "Android JUnit Test"...

...gave the error
...with the more "concrete" message

Beside the Eclipse jUnit runner which seems to have problem with the instrumentation tests, forcing me to often start them multiple times in order to get a result (hate that!!), it drove me crazy in trying to find the problem for it. I soon discovered it must depend on the included Library Project. This blog post then pointed me to the right direction and finally I solved the problem. 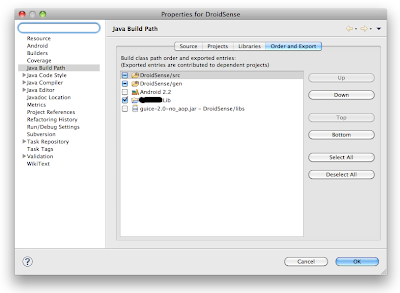 The same holds for externally included libraries.
Now everything should run "smoothly" (under quotation marks 'cause the Android jUnit integration in Eclipse is everything else than "smooth" right now).

Btw, running the tests from the shell rather than from within Eclipse runs them faster, however, remember to deploy your app on your emulator first. The command:
Questions? Thoughts? Hit me up on Twitter