Not the usual technical post :). Finally on Thursday this week my new katana arrived. It's exactly the one you see on the image. I had already one before, but now I bought a professional one. And it is great, not to compare to the previous. It is lighter and perfectly balanced. What I am doing with it?? Well, I'm practicing Yoseikan already for a while now and since the Yoseikan founders have their roots in the 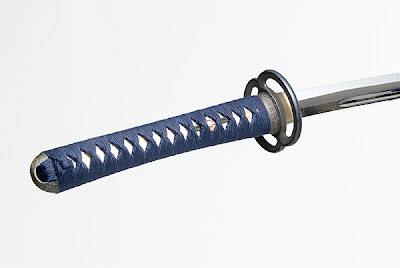 Japanese Samurai caste and want to give a broad range of knowledge in different martial art areas, we're also learning to handle a katana (usually starting with the 1 DAN). When people think of a sword they usually associate it immediately with fighting, people killing each other, basically with something negative (also due to the various martial art films you see on TV :) ). But that isn't the case. Of course, once it was used to defend oneself, as a weapon. But today, in the year 2008, it is completely a different thing. Practicing with the katana (if done correctly) can be very similar to a meditative thing, like Tai Chi. You have to be very calm and relaxed, but at the same time concentrated. It is a very high art and if you're hectic or you use too much potency it won't work. It's difficult to explain, but when practicing it gives you a feeling of calmness and balance. Reading this you'll probably declare me crazy :D but you have to experience it by yourself. Those who did it will understand what I mean.
There is nothing more relaxing than coming home in the evening after a long working day, taking out the katana, going out (I'm living at about 1,100 m above see level, so there is also the necessary silence outside) and practicing a bit. I usually do it that way. You can really clear your mind from all that tough programming problems you encountered during the day ;) Questions? Thoughts? Hit me up on Twitter