How to close Safari 3 for Win?? It's easy, just add a bookmark! 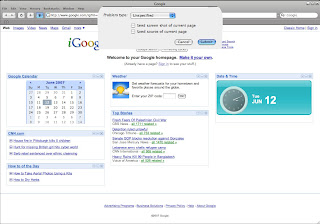 Why that?? Simply because adding (or better trying to add) a bookmark will result in a total crash of the browser. I mean...ok...it is just a beta release and not really considered for the end-user, but the amount of crashes you experience are even too much for a beta version. I just updated to version 3.0.1 and yes, now you can search via Google (before that ended in a crash).

No, apart joking....what is a real plus for them is usually the overall appearance regarding styles, special effects (see picture on right) and so on...basically the things for which Apple is known. I also cannot really confirm Apple's claim of Safari being the fastest available browser. It is faster than IE 7...ok :) but comparing it with Firefox I didn't notice any big improvement in speed...it's more or less the same, but I wonder if this will change with the first end-user version. Meanwhile, the most used feature will be "Safari's bug report"....if it works... :D Questions? Thoughts? Hit me up on Twitter