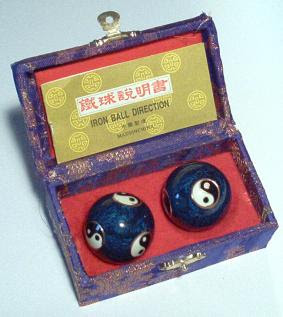 Last week tuesday was my birthday and I received a nice set of "Qi Gong" balls (see picture) from my girlfriend. As somebody may have read , I practice Yoseikan Budo already for a longer time. This passion causes also interests in other areas like Qi Gong.
Also not to post always computer science related stuff, I thought it may be interesting to put something about it here, since someone may not have heard about Qi Gong balls - although they're quite popular.

When searching on Wikipedia I got the following definition of "Qi Gong"...

Qigong is an aspect of Traditional Chinese medicine involving the coordination of different breathing patterns with various physical postures and motions of the body. Qigong is mostly taught for health maintenance purposes, but there are also some who teach it as a therapeutic intervention. Various forms of traditional qigong are also widely taught in conjunction with Chinese martial arts, and are especially prevalent in the advanced training of what are known as the Neijia, or internal martial arts where the object is the full mobilization and proper coordination and direction of the energies of the body as they are applied to some target.[...]

This relates more to Qi Gong in general. "Qi"(spelled ch'i) or "ki" (in Japanese) is a fundamental concept of the Chinese culture. It is something that exists in every living thing, some kind of "life force" or "spiritual energy". With a lot of practice this flow of Qi - of energy - can be controlled by oneself which results in a better balance and physical conditions. This is also where it relates to martial arts. The Shaolin for instance are able to get control over their Qi-energy and to focus it on whatever part of their body. In this way they are able to break iron bars on their heads without being hurt.

Usage of Qi Gong balls
I'm myself new to Qi Gong, so I can basically only write what I heard or read. The two balls are placed into the palm of the hand and then rotated with the help of the fingers. There are two kind of rotations: one where the two balls touch each other (for beginners) and then where the rotate on the hand without touching each other (more difficult).
The direction of the rotation as also the practicing hand should be changed in regular intervals, where left-handers should practice more with the right-hand and vice-versa.

Effects
According to the Chinese medicine, the "Qi Gong balls" are a way for letting the Qi flow inside ones body. When rotating the two balls on the palm, the producing "vibrations" stimulate the reflex zones on it which are linked to several organs in the body. The sound produced by some of the balls and the uniform movements have also a relaxing and calming effect.
They have also a physical effect, since the movements cause the muscles in the hand and lower arm to regularly tense and relax, improving so its muscular strength. Moreover blood circulation and agility of both of the hands are trained. Questions? Thoughts? Hit me up on Twitter